ツメ (Tsume, lit. Claw) is the second wolf to be introduced in the Wolf's Rain series. Rough and self-reliant, Tsume is a strong fighter who keeps his true feelings to himself. He only joins the others out of boredom and does not, initially, believe Paradise to exist. Though he frequently quarrels with Kiba over the course of their journey, he eventually comes to believe in Paradise as strongly as Kiba does.

When in human form, he is tall and relatively muscular, with cropped silver hair that he ties back in a small ponytail. He wears one stud earring in his right ear and two hoops in the left, one larger than the other. He wears a tight, black leather ensemble that exposes his belly, the sleeves partially ripped off.

Tsume is a large grey wolf with gold eyes and a prominent, x-shaped scar on his chest. However, Toboe has noted that Tsume has scars all over his body.

Tsume is depicted as a "stereotypical, angry anime loner" who curses a lot, but is very confident, and at times arrogant, and keeps himself distant from his allies. Though he and Kiba continue to come into regular conflict, Tsume eventually comes to believe in their goal and becomes a loyal pack member. Of all of the pack, he is closest to Toboe, whom he refers to as the "runt." Arguably, the red wolf is the one who keeps him with the pack until Paradise itself takes root in his heart.

In the anime, it is shown that before he lived in Freeze City, Tsume had always been a lone wolf and preferred being on his own to travel the world. Eventually, he found himself befriending humans more then wolves before blending in with them.

In the OVA, it is shown that before moving to Freeze City, Tsume had lived in another location with a large pack of wolves. Lady Jaguara's wolf hunting troops attacked the pack, killing most of his family and friends. As Tsume attempted to flee from the battle, his pack's leader attacked him in retribution, giving him his trademark scar. After, he was cast out by his pack, leaving him to travel until he made it to Freeze City where his self-loathing over his actions caused him to refuse to befriend others.

Tsume is first shown working with a gang of humans, attacking the nobles' supply ships. However, after he fails to save Gehl from falling, due to the boy's fear of his true form, he splits from them. Soon after, he finds Toboe, protecting the young wolf from Quent. Toboe is mainly responsible for, despite Tsume's resistance, convincing the grey wolf to join the newly formed pack; Tsume convinces himself that he's only tired of the city, and that's why he's going along.

When Toboe accidentally triggers a pressure plate that activates an attack drone, he saves the young wolf from the unearthed "war machine". When the pack encounters the city of Lost Wolves, Tsume declares that it's proof that Paradise is only an illusion. When the pack splits up temporarily, he allows Toboe to remain with him, making it clear that even if the pack broke up at that point, he would willingly stay with the young red wolf. He shows rage similar to Kiba's in the face of the wolves' plight, although he isn't nearly as surprised; when Zali helps the pack, he accuses the other of not behaving like a wolf, looking out for a pack other than his own.

When Cheza joins the pack, it seems to go a long way in convincing Tsume of Paradise's existence. He dreams of Paradise and fights with ferocity almost to match Kiba's when defending her from Darcia. Later, he and the other wolves defended Blue from being assaulted by human boys, despite his justifiable distrust of her, but later accepts her presence in the pack.

When Toboe says that he wants to stay with the Indians, he shrugs and gives his consent, so long as it is what the pup wants. When the pack reaches Jagura's city, he's the first one to discover Hige's connection with the noble, stumbling into a hall filled with stuffed wolves sporting similar collars to Hige's within the castle. At first he is critical of the Mexican wolf, but comes to realize that Hige did not betray the pack, consciously or willingly.

After Toboe is killed, Tsume drops his tough-guy facade and cries over his body. He begins to rhetorically recount the tale of how he got his scar.

Tsume is the last of the pack to remain standing with Kiba in the final battle against Darcia.

Just before joining Kiba, however, Tsume commits a coup de grâce, to end Hige's suffering after Darcia's vicious attack. Despite putting up a fierce fight, he is killed after Darcia rips open his side and inflicts huge gashes to his legs. Before dying, he whispers to Kiba the exact words Hige told him "Let's meet again... next time.... in Paradise." Tsume then lets out a haunting howl before dying.

At the end of the series, Tsume is seen in his human form riding a motorcycle in a city, glancing up as if hearing something.

In the beginning Tsume dislikes Kiba. He finds Kiba as egoistic and “blind“ as he follows his instincts and won’t listen. He dislikes how Kiba tries to manipulate the others by making them believe in Paradise. In episode 6 he starts believing Kiba’s words and accepts him as the leader of the pack.

Initially, Tsume rejects Toboe's friendliness and tells him to go away; often scolding Toboe for his acts of carelessness and naivete. In episode 4, however, he shows a change of heart as Toboe ungrudgingly tolerates his aggressive remarks and shows genuine care for him, attempting to clean his wounds and at one point endangering his own life to allow the gray wolf to escape. At the end of this episode, Tsume finally allows Toboe to help him as the red wolf rushes to his side. His relationship with the younger wolf strengthens into a brotherlike bond over the course of the series, the two expressing mutual care for one another and arguably developing into the strongest bond among the pack. Tsume strayed behind the rest of the pack at Toboe's death to mourn him, talking to and weeping over his body. He states that he wanted to take Toboe to Paradise, and that the pup was the driving force that carried him this far.

Tsume dislikes Hige, as much as everyone else, at first. He acts cold against Hige and Hige acts the same. Hige often teases him or jokes around in serious situation. After a while they become more friendly towards each other, and often teases each other.

Tsume acts skeptical towards Cheza, saying that she is the source of their problems. He keeps his guard up until he finally accepts her as part of their pack.

Tsume destroys the sentry robot on the train.

Kiba confronted by Tsume and his gang. 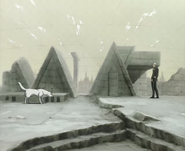 Back Cover of Volume 1

Wolf mouth settei.
Add a photo to this gallery

Retrieved from "https://wolfsrain.fandom.com/wiki/Tsume?oldid=12744"
Community content is available under CC-BY-SA unless otherwise noted.